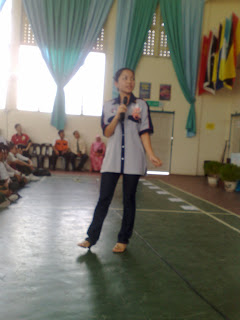 Sunday 17th August 2008 – We travelled south early in the morning to Papar about 50 minutes drive from Kota Kinabalu. Our destination was Sekolah Menengah Majakir, Papar, Sabah. Students from 15 schools within the vicinity were gathered in the school hall. We were welcomed by students bearing ‘bunga mangga’ and ushered us to the hall. We were followed in by a group of boys beating the kompangs. It was an overwhelming experience with around a thousand students cheering us on. After a brief opening ceremony which had confetti blown all over us, Devina David took to the floor and started her presentation. She spoke in their local tongue and the crowd adored her. Being one of only two female candidates, she was their icon from Sabah. Devina moved around the hall and explained about the selection process. The crowd listened intently. When she was done Dr. Faiz took over and talked about the space programme. The talk was very interactive and the students truly enjoyed themselves. After a quick session of question and answers, the photograph and autograph session followed. Later, Dr. Faiz planted a tree and officially opened their ‘Angkasawan’ garden. We then had some lunch provided by the school before heading on back to Kota Kinabalu. 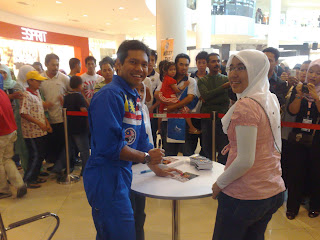 By the time we got to 1Borneo Hypermall, our booth was buzzing with people. At 4pm a line was formed for an autograph session with Dr. Faiz. He was positioned in front of our booth and the line went on and on into the mall. The general public was more than happy to get a snapshot and a signed postcard of him. We were busy throughout the evening enjoying the public interaction. At 6pm we packed up to close a highly successful week long exhibition. I suddenly felt tired at the end of it but looking back at the whole week I felt glad to have contributed my time and effort for a good cause. Just thinking about all the thousands of students and people that we connected with left a smile on my face. Until the next roadshow (‘Jerayawara’ in BM; a new word I learned) hope to see you all next time…. 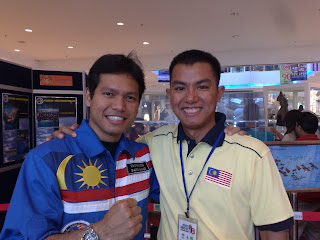 Ok… one for old times’ sake