Thursday 14th August 2008 – This morning Science, Technology and Innovation Minister Datuk Dr. Maximus Ongkili officially launched MISTI MOSTI (Minggu Sains, Teknologi & Inovasi Peringkat Sabah) at the newly opened 1Borneo HyperMall, Kota Kinabalu’s version of KL’s Midvalley Mall. The event showcased divisions and agencies under MOSTI from Sea to Space and ICT divisions, MIMOS to Technology Park and not forgetting ANGKASA, Malaysia’s National Space Agency. ANGKASA had set up a terrific exhibition booth and on display were a Lunar space suit and a miniature model of the International Space Station (ISS). Information about the Planetarium, Space experiments and the Angkasawan programme were on the the display boards making up the walls of our booth. A plasma television located at the rear entrance was running video clips of Dr. Sheikh Muszaphar floating up in space. 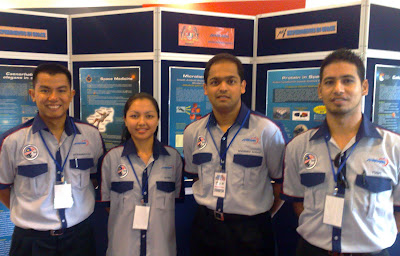 The four of us (as pictured above) represented our association as candidates of the Angkasawan programme. Together in our group of four was Devina David a Sabahan lass from Keningau, one of only two female candidates that made it to the selection process. The Minister made a special visit to our booth to personally meet her. They were proud of her. We were introduced to the Minister by ANGKASA’s Director General Dr. Mustafa Din Subari. 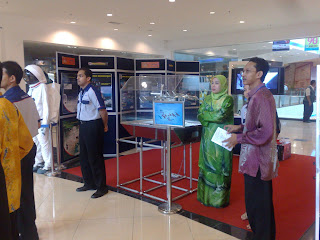 After the opening ceremony, our booth was swarmed by the general public and school children. They kept us busy the whole morning. We were glad to interact with them indirectly generating public awareness about our space programme. Later on in the afternoon I took to the floor and gave a talk about my experience during the selection process. I touched on the effects of g-forces and showed the audience video clips of the centrifuge. The kids looked on with great interest as they watched the effects of centrifugal forces. At the end of my talk, I introduced Dr. Faiz Khaleed and he continued speaking about the importance of our space programme.

At 5:30pm we called it a day and headed to Tanjung Aru beach for a quick and early dinner. It had been a long day standing at our booth but nonetheless fulfilling as I got to give a talk and do my bit for society. Until tomorrow…Good night….