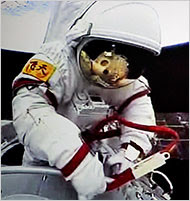 The Chinese astronaut Zhai Zhigang made the nation’s first spacewalk on Saturday,
floating outside the Shenzhou VII spacecraft for 18 minutes as it orbited the earth.

BEIJING — A Chinese astronaut orbiting the earth lifted himself out of the Shenzhou VII spacecraft Saturday afternoon and performed the nation’s first spacewalk, another milestone in China’s space program.

Zhai Zhigang, 42, pulled himself out of the orbital module about 4:40 p.m. Beijing time, latched himself to a handrail with two safety cords and then waved to a national audience during a live broadcast of the country’s third space mission with an astronaut.

“I am here greeting the Chinese people and the people of the world,” Mr. Zhai said, waving to a camera attached to the module.

The feat was part of China’s effort to establish a space station by 2020 and eventually to land on the moon.

For the Chinese government, which devotes extensive media coverage to its space missions with astronauts, the achievement was another step toward establishing the country as an economic and technological superpower.

This was the country’s third human space mission in five years. Before China, only the United States and the Soviet Union, and later Russia, had sent people into space, though astronauts from other countries have joined the missions.