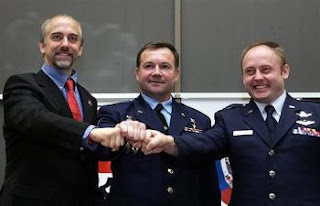 STAR CITY, Russia (AFP) — US multi-millionaire businessman and space tourist in training Richard Garriott said Tuesday it was his lifelong dream to go into orbit, following in the footsteps of his astronaut father.

“Every youngster in the world” wants to fly into space, Garriott said at the Star City cosmonaut training centre near Moscow, where he is preparing for an October 12 launch to the International Space Station.

But “growing up with both a father who was an astronaut as well as all of my neighbours who were either astronauts or NASA engineers, that dream sunk in even more deeply,” added Garriott, the son of US astronaut Owen Garriott.

Garriot said he had received spaceflight advice from his father, who in 1973 spent two months aboard Skylab, the first orbiting space station, and then returned to orbit aboard the space shuttle 10 years later.

Richard Garriott paid more than 30 million dollars (20 million euros) to be launched into space from Russia’s Baikonur cosmodrome in Kazakhstan, according to Space Adventures, the US-based company that organised his trip.

During his voyage with Russian cosmonaut Yuri Lonchakov and US astronaut Michael Fincke, Garriott will monitor communication systems, according to the Star City training centre.

Garriott, who made his fortune developing computer games, said he hoped to find ways to make space travel profitable and financially self-sustaining.

“As an entrepreneur, I believe strongly that space is a place where businesses can and should be profitable,” he said.

With his planned launch, Garriott hopes to join the exclusive club of space tourists who have paid millions to go into orbit.