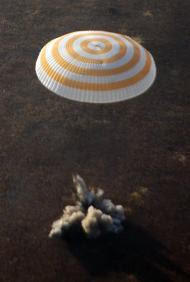 MOSCOW (AP) — Soon after he touched down Friday, American space tourist Richard Garriott got a pat on the head and an admiring question from his astronaut father. “How come you look so fresh and ready to go?” 77-year-old Owen Garriott asked his son, who was sitting in an armchair on the steppes of Kazakhstan after being pulled from the gumdrop-shaped Soyuz capsule.

“Because I’m fresh and ready to go — again,” Richard declared. “What a great ride that was.”

Richard Garriott, a 47-year-old computer games designer who created the Ultima game series, paid US$30 million for trip to the International Space Station. When he lifted off Oct. 12, he became the first American to follow his father into space.

Friday’s landing went perfectly — a relief to space officials. In the last two Soyuz landings, the craft went into “ballistic descent” — free fall — subjecting the occupants to high G-forces and sending one of the capsules far off target.

The smooth re-entry may ease concerns about plans to discontinue the U.S. space shuttle program in 2010. That will leave Russian Soyuz craft as the only way to ferry people to and from the station, which is scheduled to host crews of six instead of three starting next spring.

“I’m looking forward to some fresh food and to calling my loved ones,” Garriott said in televised comments. “I’ve got my father here, but I’ve got other family back home I want to get ahold of.”

Garriott, who lives in Austin, Texas, was seen off by his girlfriend and his older brother, among others, when he lifted off for the station in another Soyuz craft. He was accompanied on the return flight by Russian cosmonauts Oleg Kononenko and Sergei Volkov, who spent six months on the space station.

Volkov, helped to a chair next to Garriott and also wrapped in a blanket, looked a little wearier than the American, after 199 days in space. The son of a decorated cosmonaut who was in orbit when the Soviet Union collapsed in 1991, Volkov beat out Garriott as the first human being to follow a parent into space.

Kononenko was the last out of the capsule and could not be seen in the TV footage.

The head of the Russian space agency Roskosmos, Anatoly Perminov, said on state-run Vesti-24 television that Kononenko had a tougher time than his crewmates during the descent but “feels good now.” The longer one stays in space, the harder it is to adjust to gravity.

Garriott conducted experiments while he was on the station — including some whose sponsors helped pay for a trip Garriott said cost him a large chunk of his wealth. He also took pictures of the Earth’s surface to measure environmental changes since his father snapped photos from the U.S. station Skylab 35 years ago.

“This is obviously a pinnacle experience,” Garriott said.

And he praised the Russian equipment. “This Soyuz TMA-12 operated wonderfully.” he said.

The craft’s crew module separated without a hitch before it entered the atmosphere, and a series of parachutes gradually slowed its speed from 230 meters (755 feet) per second to about 1.5 meters (5 feet) per second, according to an announcer on NASA TV.

On a Soyuz returning in May, the malfunction of an explosive bolt delayed the separation of the re-entry capsule from the rest of the ship. It forced the crew — including a U.S. astronaut and South Korea’s first space traveler — to endure a rough ride as the gyrating capsule descended facing the wrong way.

It took nearly half an hour for search helicopters to locate the capsule, which landed 20 minutes late and 260 miles (420 kilometers) off target.

Last October, a computer glitch sent Malaysia’s first astronaut and two Russian cosmonauts on a steeper-than-normal path during their return to Earth.

Russian space officials said changes had been made to equipment and computer programming to prevent another ballistic descent.

U.S. astronaut Michael Fincke and Russian cosmonaut Yuri Lonchakov, who traveled to the station with Garriott and joined U.S. astronaut Gregory Chamitoff, are scheduled to stay six months and work on renovations to expand its capacity. The shuttle Endeavor is due to bring equipment needed for the project in a few weeks.

There are also worries the global financial crisis could disrupt plans for the station in the coming years.

The head of Russia’s state-controlled RKK Energiya company, which builds the Soyuz, said Friday that construction of ships for the next few missions was on schedule, but further plans could be jeopardized by the credit crunch. Vitaly Lopota said the banks had been slow to provide loans to the company, and he urged the government to quickly earmark funds.

Perminov downplayed the issue, saying the government would make sure a lack of money does not derail planned missions.

“We will solve the problem,” he said.