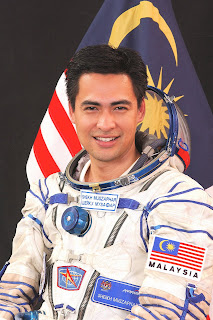 National Astronaut Datuk Dr Sheikh Muszaphar Shukor Sheikh may continue being under the Science, Technology and Innovation Ministry’s payroll but he will have to subscribe to a more stringent contract.

Minister Datuk Dr Maximus Ongkili said probes into allegations that Dr Sheikh Muszaphar had been charging exorbitantly for motivational talks had been completed and that the orthopedic surgeon-turned-astronaut was given a show-cause letter, which he replied to.

“Except for a few things, by and large his answers were acceptable … with that, we are on to the next phase, his next role in the Ministry and the whole (Angkasawan) programme. He acknowledged that there was charges made (for talks) and gave reasons for them. He qualifies to stay with the ministry if he intends to stay,” Ongkili said.

The Ministry’s legal unit will meet after the Chinese New Year to cover all loopholes and gray areas in Dr Sheikh Muszaphar’s previous contract.

Dr Sheikh Muszaphar, Ongkili said, had argued that he conducted talks, at night, outside of office hours. The probe also concluded that the astronaut had been conducting talks abroad and some of his commitment with the government contradicted with his engagements with the private sector.

Ongkili dismissed reports that the astronaut had become a millionaire by charging over RM8,000 an hour for each talk. Reports also claimed the fees did not include his hotel stays and flight tickets for appearances in Sabah and Sarawak, hinting he may have amassed such fortune since his space journey in October 2007.

The ministry then opened up the inquiry to the public, allowing them to lodge reports against Dr Sheikh Muszaphar.

“Yes, there had been some receiving of money … In his own way he fixed the fees for the purpose (talk), but nothing of that sort (achieving millionaire status),” he said.

1 thought on “Angkasawan cleared of wrongdoing”