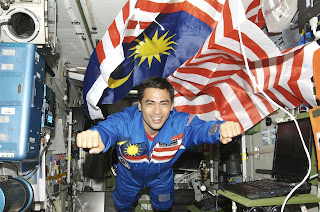 He said he had met Saudi Arabia’s Crown Prince Sultan Salman to discuss how to form the agency when he performed the haj last year.

Prince Sultan is a retired officer in the Royal Saudi Air Force and a former astronaut.

He is the grandson of King Ibn Saud and the only Saudi citizen to travel in space as well as the first Muslim to do so.

“I hope more Muslims can travel in space and more Muslim aerospace experts can meet and contribute to science and technology,” said Dr Sheikh Muszaphar after a Batek Modelling exhibition in conjunction with Chinese New Year 2009 at Galeri Seri Endon.

On another matter, he said he had met Deputy Science, Technology and Innovation Minister Fadillah Yusof to clarify the allegation that he had amassed wealth from giving talks on his space experience.

He added that he was waiting for a response on whether his contract with the ministry would be continued.

Dr Sheikh Muszaphar was alleged to have charged RM8,000 per hour for his talks and also to have amas-sed RM1.2 million from 150 companies upon his return from the International Space Station in 2007. — Bernama