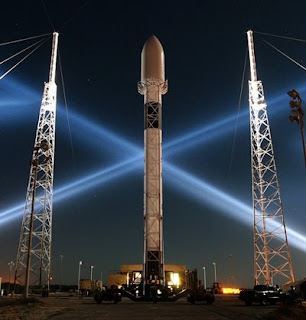 KUALA LUMPUR, July 12 (Bernama) — Malaysia’s innovation pride, the RazakSAT satellite, is all set for a lift off as scheduled on Tuesday (July 14) from Kwajalein Atoll in the Republic of the Marshall Islands.

It said upon arrival, the minister and his delegates were briefed on the readiness of the launch by Astronautic Technology (M) Sdn Bhd chief executive officer Datuk Dr Ahmad Sabirin Arshad.

The minister was also informed that the satellite and launch vehicle, the Falcon 1, which is operated by United States’s Space Exploration Technologies (SpaceX), have now been erected on the launch pad at Omelek Island, the launch site for Falcon 1.

Named after Malaysia’s second prime minister Tun Abdul Razak Hussein, it will orbit the Near Equator Orbit (NEqO) at a nominal altitude of 685km.

The orbital location will allow increased frequency in the image observation of the Earth’s surface and environment.

RazakSAT will carry a high resolution camera which can capture images from space for differnt applications such as precision farming, landscape mapping, disaster mitigation, urban and road network planning, which will not only benefit Malaysia but also other countries along the equatorial region.

The images could also be used to study various meteorological phenomena.

According to the statement, prior to this, the launch if the Low Equatorial Orbit (LEO) satellite was delayed due to vibration problems on the launch vehicle.

However it said all issues related to the problem had been rectified with upgrading carried out by SpaceX.

“I am satisfied with the preparations and necessary steps taken by ATSB and SpaceX to ensure a smooth launch. We hope all Malaysians will pray for the successful launch of RazakSAT,” Ongkili said.

During the visit to Guam, Ongkili and his delegation are also scheduled to visit a marine laboratory and marine heritage and oceanography centre at the University of Guam.