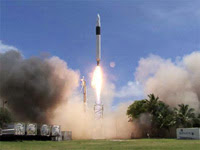 Twenty minutes into launch, the 180kg satellite entered the Near Equatorial Orbit (NEqO) to become the world’s first remote sensing satellite launched into the NEqO, the Ministry of Science, Technology and Innovation said in a statement here Tuesday.

The launch at Omelek Island using Space Exploration Technologies (SpaceX)’s launcher Falcon 1 went smoothly after a four hour delay due to the need to fulfill some technical requirements.

The ministry said that one-and-a-half hours into the launch, initial contact was established by the National Space Agency at Sungei Lang in Banting with Razaksat.

Science, Technology and Innovation Minister Datuk Dr Maximus Ongkili and officials from the ministry and agency Astronautic Technology (M) Sdn Bhd were in Guam to witness the launch via webcasting.

Simultaneously, the ministry officials led by Deputy Minister Fadillah Yusof watched the launch and held a teleconference with the group in Guam via webcasting at the National Space Agency in Banting, Selangor.

There was an air of jubilance when the satellite, named after Malaysia’s second prime minister Tun Abdul Razak Hussein, blasted into space after a drizzle and strong wind at the launch site.

Dr Ongkili said the launch was historical not only for Malaysia but the world. The satellite will orbit the NEqO at an altitude of nominal 685km.

RazakSAT carries a high resolution camera that can take images from space for different applications to benefit not only Malaysia, but countries along the equatorial region.

Dr Ongkili said that while other satellites operate on polar orbit (Sun Synchronous Orbit), the RazakSAT� operates at NEqO and will cover 70 percent of the oceans, where weather phenomena such as La Nina originate.

“This will allow scientists to study and monitor various critical factors that will contribute significantly to science,” he said.

Several countries in Asia, the African continent and Latin America have expressed interest in utilising the images captured by RazakSAT, he said.

Malaysia, he said, would also be offering the data to contribute to the field of knowledge to benefit societies all over the equatorial region.

Remote Sensing Malaysia, an agency within the ministry, would be responsible for receiving the data from RazakSAT and developing its applications, Dr Ongkili said.

RazakSAT is a continuation of the TiungSAT-1 programme, the country’s first remote sensing satellite launched in 2000. However, RazakSAT is a fully functional satellite in monitoring the earth’s surface and environment.

Dr Ongkili is confident the achievement would propel and inspire the ministry’s agencies and Malaysians at large to continue to strive to be innovative and creative, particularly as the country celebrates the Year of Creativity and Innovation next year.

“We aim to make a mark for Malaysia in the world of science and innovation, not just by exploring the borderless world but to go beyond, into space,” he added.

He also announced that SpaceX has agreed to launch the two micro-satellites CubeSAT and InnoSAT, meant for educational purposes, next year on Falcon 9.

The RazakSAT� satellite will be operated through its ground segment in Malaysia, consisting of a Mission Control Station (MCS) and Image Receiving and Processing Station (IRPS).