AS Malaysia’s first astronaut, Angkasawan Datuk Dr Sheikh Muszaphar Al-Masrie Shukor has become a national hero, as well as a poster boy of sorts for the National Space Agency (Angkasa), under the auspices of the Science, Technology and Innovation Ministry (Mosti). His dashing good looks and charming personality have endeared him to the public, and generated much interest in the country’s efforts towards becoming one of the elite group of countries to have made it to space.

Dr Sheikh Muszaphar, however, is not simply a talking head for Malaysia’s space programme. While very supportive of the endeavour, he is quite vocal when pointing out what he perceives as its flaws.

What disappoints him is a lack of follow-through after his return from his mission to the International Space Station (ISS). 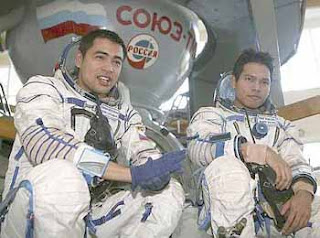 “I believe Mosti should do more for the space programme. It’s not just about training astronauts; there also needs to be efforts to unite aerospace engineers, who are mostly working in other industries now,” he says.

“Mosti should also have a vision, a blueprint. Look at South Korea, they went up after me (Korean Yi So-yeon was sent to the ISS in April 2008), but they already have a second phase programme.”

While declining to comment on Dr Sheikh Muszaphar’s statements, Angkasa’s director-general Dr Mustafa Din Subari shared in a phone interview that a second space mission is already in the planning stages, to be implemented within the next five years.

Currently in talks with the Russians and the National Aeronautics and Space Administration (Nasa), Angkasa is planning to send Mejar Dr Faiz Khaleed, who served as Dr Sheikh Muszaphar’s back-up in the first mission, to the ISS.

“The first mission was very significant because it was the first opportunity to send a Malaysian into space. That in itself put Malaysia on the map. (We think) that the second mission should be even more significant, by making it a longer stay, and emphasising much more on scientific experiments,” explains Dr Mustafa, adding that they are targeting a four to six-month stay aboard the ISS for Dr Faiz.

While Dr Sheikh Muszaphar’s mission was funded by the government-to-government offset agreement with Russia, Dr Mustafa says the next trip into space will be financed by the Malaysian government.

He further says that the results of the five experiments Dr Sheikh Muszaphar carried out in space will be disclosed later this month at a workshop being held in Kota Kinabalu.

“We have been reaching out to several schools a week since the space mission, with the aim of creating awareness (on the programme). We also launched a coffee-table book last month that details the first mission (from beginning to end),” he says.

Dr Sheikh Muszaphar, however, does not believe Malaysia is ready to send another astronaut into space in the near future.

“Not only is it extremely expensive, about US$30mil (RM101mil) for 12 days, but Mosti must have an objective for the mission. They should study exactly what they want to do (on this mission),” he says. “However, I do hope the next mission, when it happens, is better than mine.”

Having parted ways with Mosti to rejoin Universiti Kebangsaan Malaysia, where he has previously both studied and lectured, Dr Sheikh Muszaphar is not part of the ministry’s recently started Malaysia Astronaut Foundation.

Instead, he says he is forming an independent association with the 51 other candidates who were shortlisted for the Angkasawan programme. The association will work on educating and creating awareness on science and space exploration.

“I get frustrated when things are not moving along (with the space programme),” admits Dr Sheikh Muszaphar. “I believe whoever conquers space will conquer the world.”