Malaysia’s Angkasawan may be settling down, but that won’t diminish his passion for space travel.

TWO years after he became the first Malaysian to be sent into space, Datuk Dr Sheikh Muszaphar Al-Masrie Shukor is set to embark on an adventure of a different kind.

Engaged to Dr Halina Mohd Yunos, his sweetheart of eight years, the Angkasawan will tie the knot next year – and he is looking forward to family life. 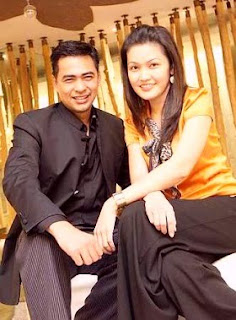 “I think it’s about time I settled down,” he shares during an interview at his recently-launched clinic in Starhill Gallery, Kuala Lumpur. “I’m going to be 38 next year, and I’ve always been a family man.”

Dr Halina, 28, laughs when asked if she’s glad they are finally getting hitched. “It’s always been part of the plan, he (Dr Sheikh Muszaphar) just had many other things to do first. He’s very focused and ambitious, and that makes me very proud,” she says.

When asked how she first met Dr Sheikh Muszaphar, Dr Halina, who is from Kluang, Johor, reveals it was when she was a medical student at Universiti Kebangsaan Malaysia (UKM) and he was her lecturer.

“It’s a little embarrassing, really!” she laughs. “You’re not supposed to have these so-called ‘sparks’ with your teacher!”

As for what it’s like to be with Malaysia’s first astronaut, she cheekily says she’s heard all his stories a thousand times. “But being in space is an amazing thing, and not everyone has the chance to experience it. Being close to him is probably the next best thing for me!” 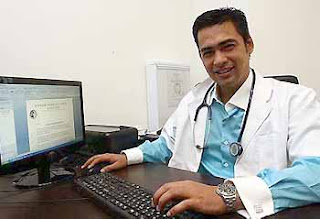 Don’t expect marriage to slow Dr Sheikh Muszaphar down, however. “There will be no such thing as taking a break,” he stresses. “There is a lot of work to be done, and getting married isn’t going to change my passion for my work.”

Out of this world

Launched to the International Space Station (ISS) aboard Soyuz TMA-11 on Oct 10, 2007, Dr Sheikh Muszaphar spent 12 days in space, fulfilling a dream he had held since the age of 10.

“It still feels like yesterday that I was (out in space); even now, I still dream about it,” he says. “The experience was out of this world, literally speaking!”

It definitely wasn’t a bed of roses, however. As part of his training in Russia, Dr Sheikh Muszaphar had to endure temperatures as low as -45°C in Siberia, sit in a spinning chair for 25 minutes every day, and prepare for microgravity environments by floating in the Black Sea for three days. And that was just the initial part of his adventure!

In the space station itself, where being in microgravity caused him to float, even the simplest daily task was a challenge.

“It’s a completely different environment, and you have to re-learn how to do all the simple things you take for granted,” he says. “For example, your taste buds change. Although the food we had was regular food that was freeze-dried and vacuum-packed, (sometimes) what you like on Earth will not be the same in space. I love mashed potatoes, but I did not like the taste of it up there at all.”

As for drinking fluids, it all has to be done through a straw, as liquids separate into little globules that can damage equipment if they are left floating around.

Even going to bed was a tricky exercise, as the astronauts slept floating, while tied to a sleeping bag. Dr Sheikh Muszaphar recalls how he forgot to tie himself one night, and woke up floating freely around the cabin.

Showers were a luxury he had to do without, as water was very limited. “We used wet wipes to clean ourselves, and when we shampoo our hair, we just wipe out the suds instead of rinsing,” he explains. “And when you brush your teeth, you swallow instead of spitting out.”

Of course, the worst was probably having to answer nature’s call. Dr Sheikh Muszaphar describes how one has to make sure he is fixed in a stable position, and then use a funnel with vacuum suction to “go” in. The bodily wastes are then ejected into the atmosphere, where they burn and disintegrate. “I hated going to the toilet in space, it was very uncomfortable!” he laughs.

The discomforts did not end after the stay at ISS. Upon returning to Earth, Dr Sheikh Muszaphar had to be quarantined, and poked and prodded by a team of doctors.

“Your body goes through many changes in space; your muscles become atrophied, and your bones become brittle. When I first got back, I couldn’t walk, I couldn’t even lift my hand! We had to go through many, many tests, especially for radiation exposure,” he says, adding that one day in space exposes a person to radiation equivalent to five chest X-rays.

“But if you ask me if I’d go through all of it again, I’d definitely say yes. This is my passion, and I’d do anything to go into space!” says the cosmonaut, whose book on his time in space, My Journey Into Space, will be released next month.

Since returning, Dr Sheikh Muszaphar has thrown himself into creating more awareness about space travel, and science in general. Over the past two years, he has been travelling around the country giving talks on his experiences, particularly in schools.

“The euphoria among the students (about my expedition) is still there. They all want to become astronauts!” he says. “What I tell them is that the chances of becoming an astronaut are not very big, as only very few are lucky enough to be selected. Instead, I encourage them to take up science, to become doctors, scientists, aerospace engineers.”

Having parted ways with the Science, Technology and Innovation Ministry earlier this year, the doctor has been revisiting his beginnings.

Besides his new clinic, which offers free treatment to several orphanages in Kuala Lumpur, he has also rejoined Universiti Kebangsaan Malaysia, where he did his master’s in Orthopaedic Surgery. He is currently involved with the university’s Institute of Space Science, where he is hoping to prepare teaching modules that can be taught to students next year.

Dr Sheikh Muszaphar is also in the midst of forming a scholarship programme with the Allianze College of Medical Sciences, due to kick off next year, to sponsor 200 students in the study of science. For younger enthusiasts, he is hoping to kick off a space museum that holds regular space camps.

He has big plans involving other astronauts from around the world as well, starting by bringing 100 of them to Malaysia next year.

“My plan is to send them all over the country to talk to students, to catalyse a deep interest in science,” he says.

Furthering his interest in Islam and space travel, he also hopes to form an Islamic space agency, uniting the eight other Muslim astronauts from countries like Iran, Syria and Kazakhstan.

All this seems like quite a lot for someone who will soon be juggling his work demands and a wife. But Dr Sheikh Muszaphar isn’t fazed in the slightest.

“Many people come back from space feeling different; some become very spiritual, and some even get depressed. Me, I’ve gained an appreciation of our time on Earth. We need to look at the big picture and live life to the fullest,” he says.