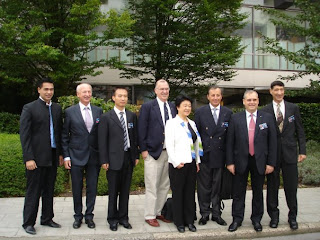 He pointed out that the 100 astronauts will be meeting over 200,000 school students throughout the country within one day.

“The astronauts will be going around the country including Sarawak and Sabah, and I hope we would be able to meet about 200,000 Malaysian school students,” he said. Meanwhile, Muszaphar was asked on his toughest challenge in being an astronaut.

“Mental strength is my toughest challenge. How do I deal with it? Well, whenever I’m faced with a tough challenge, I would close my eyes and imagine the hopes the country puts in me. They are the catalyst of my success,” he revealed.

When asked his ambition in life apart from being an astronaut, Muszaphar said he wanted to become an aircraft pilot and work with charitable bodies for African children.

“My first ambition would be realised around 2013 because at the moment I am still committed to motivating students,” he said.